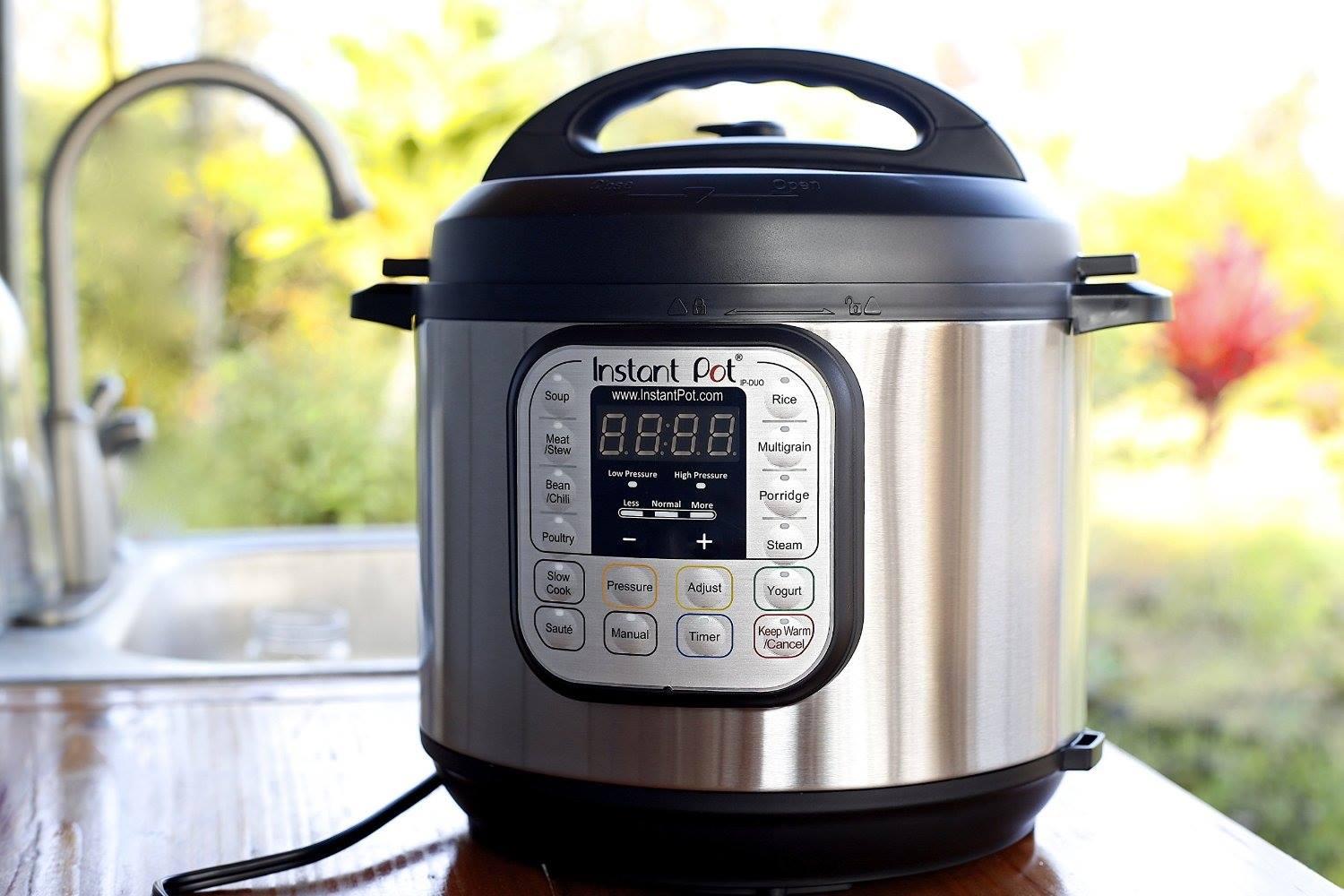 As you know I am a fully qualified nutritional therapist. I also have an absolute passion for food so I am always looking for quick and easy ways to prepare tasty and nutritious recipes not only for my own family but to share with others too. I’ve created a lot of ‘sheet pan’ recipes in my time, many of which are shared in my new book ‘Sheet Pan Cooking: 101 recipes for simple and nutritious meals straight from the oven‘ now available online and in all good bookstores both in the US, and the UK (due for publication 1 May 2018 in Australia). However, I am also a fan of my electric multi-cooker, otherwise known as an Instant Pot.

How many of you have heard of an Instant Pot? You may have seen articles in newspapers and magazines over Christmas and into the new year about this ‘miracle machine’. Those who own one are apparently members of a ‘cult’ according to several national newspapers. They’re known as ‘potheads’! If you actually happen to own one of these revolutionary kitchen machines then you’re lucky. They’ve sold out across the whole of Europe and will be available again only in April. A classic case of demand overwhelming supply. It’s a situation that the makers of Instant Pot could not have predicted. A trend, if you like, for people who want a decent piece of kitchen equipment that really does make the task of creating meals from scratch each evening a doddle.

I first came to Instant Pot about 4 years ago. However, I only actively started using it about 18 months ago. The truth is that the short journey to becoming a ‘pothead’ has been intoxicating. From a starting position of not really knowing whether this machine before me was a slow cooker, a pressure cooker, a yogurt maker or a rice cooker to someone who has the confidence to throw ingredients into the pot, set it for a period of cooking and come back (often after picking up children from school or activities) to a perfectly cooked meal.  The answer to the question of what this machine is is all of these things and more!

What is an Instant Pot?

It’s essentially a multifunctional cooker that is able to slow cook, steam, pressure cook, sauté and even make yogurt. It is the combination of steam and pressure that cooks your food quicker and safer than other devices, making everything from the slow cooked tender roasts, through to perfectly cooked curries and even delicious, perfectly cooked rice and quinoa dishes.

How do I use MY Instant Pot?

Getting started with my machine took a little time. Once I did get started though the ever growing support community online provided all the information and knowledge I needed. They provided that support in a very non-condescending way which is welcome in this day and age. Once you build your confidence with the initial water test, then something like a stew or soup you will get going. Rice and quinoa dishes soon became an absolute doddle. For busy families the function that I would recommend becoming familiar with first is the pressure cooking feature, which uses pressure to cook food faster. The sorts of slow cooked textures you may be used to but which would otherwise take hours and hours can be created in minutes using the Instant Pot. That’s the appeal for those who have extremely busy schedules (evenings especially) and want a decent meal but don’t have time to stand over the stove.

What is pressure cooking?

A little physics here but  when atmospheric pressure is lower, such as at altitude, it takes less energy to bring water to boiling point. Less energy means less heat which means it takes longer to cook at altitude than at sea level. Pressure cooking is the opposite of this. The presence of pressure means it takes longer to boil but food cooks far more quickly. Bear in mind also that steam can’t escape from the pressure cooker, so you avoid losing water and are able to cook foods without losing heat.

What about phytic acid in grains and lectins in beans?

Well pressure cooking also trumps other methods here as these are deactivated by pressure cooking where they are not with other cooking methods. Phytic acid and lectins can stand in the way of absorption of nutrients. They are also hard for the body to digest which is why some experience flatulence with grain and bean based foods and dishes.

What I cook in my Instant Pot?

The most commonly cooked dishes in our household are:

Here’s an initial recipe to get you started:

Press Sauté on your Instant Pot. Add the ghee or butter to the pot. Add the bacon and sauté for about 5 mins. Remove from the pot.

Add the onion, celery and stir in the residual bacon fat. Add the water, stock paste and then the butternut squash cubes. Secure the lid in place and set to Manual for 5 minutes.

At the end of cooking release pressure using the QPR method – basically use a wooden spoon to turn the valve anti-clockwise to open and allow the pressure to release.

Use a food processor to process the contents of the Instant Pot and the chestnut puree together.

Add the cream and the sautéed pancetta back to the pot with the soup and allow it to heat through again then serve.

Note: The link to my book on Amazon is an affiliate link. That means I make a little money from each purchase of the book beyond my standard commission for writing the book.